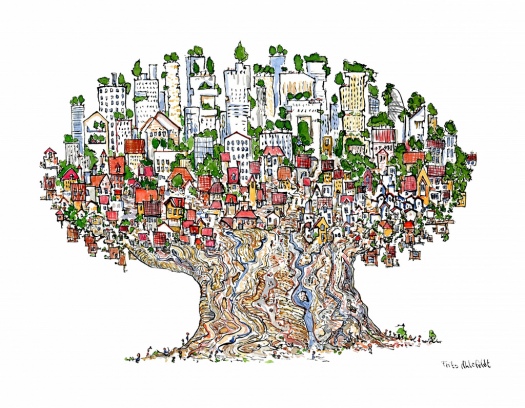 Globe & Mail journalist Doug Saunders recently penned an op-ed analyzing the the state of the world’s forests. The picture he paints is rather rosy. Saunders reports that they’re growing back, particularly in countries with their increasing urbanization, commercial agriculture and economic growth, such as Brazil and Indonesia.

The claims he makes about global forest growth, however, contradict those found the Inclusive Wealth Report 2014, a joint initiative of the United Na­tions University and United Nations Envi­ronment Programme. This report found that between 2000 and 2012, Brazil, Canada, Indonesia, Russia and the United States saw 117 million hectares of tree loss, representing about half of all tree loss this century. The report also found that the biggest single-country loss of tree cover was seen in Brazil,  though Indonesia is now losing forests at a faster rate due to illegal harvesting. “For every hectare of new growth in those same five countries, more than two hectares were lost”, the report claims.

In addition, Saunders points to a study that found that “the share of carbon emissions caused by deforestation has declined by a third in the past decade.” What Mr. Saunders overlooked, however, was that this study indicates that the share of emissions from deforestation decreased because it was overtaken by emissions from the agriculture sector—presumably due to increased demand resulting from urbanization—and which continue to grow at a rate of 1% annually.

While many ecological benefits can hypothetically be realized through the increased efficiencies of urbanization, it’s important to note that it also has to potential to produce the opposite effect: for example, recent studies have shown that megacities consume more than their share of resources and waste per capita.

Like all issues related to ecology, the interrelationships and feedback loops are complex and non-linear, often with surprising results. Urban ecosystems are no different.