Mandatory public disclosure of building performance is gaining momentum around the globe. It has now been adopted in parts of Europe and Australia and by over a dozen U.S. jurisdictions, including Seattle, San Francisco, New York, Washington, D.C. and California.

While no Canadian jurisdiction has yet introduced public disclosure laws, such a move can’t be too far down the road. Reports from those regions that do have mandatory disclosure laws suggest that implementing such programs leads to energy savings and resultant financial rewards. Mandatory public disclosure also raises public awareness and serves as a catalyst for meaningful action on climate change.

Mandatory performance disclosure – also known as mandatory reporting or benchmarking – is a program which requires building owners within a city or region to annually report on their building’s environmental performance. This typically means energy performance, but it can also include water performance and greenhouse gas (GHG) emissions.

The disclosure process requires building owners to collect at least 12 months of total energy use data from all sources, including electricity, gas, steam, fuel oil and chilled water. From this data, a normalized energy use intensity (EUI) is calculated. “Normalizing” energy takes into account a building’s particular physical and operational attributes: weather, gross square footage, occupancy, operating hours, and space uses, including any that are energy-intensive such as data centres. The measured energy use is adjusted to reflect the energy under a standard set of attributes. This allows buildings with different attributes to be compared fairly – that is, a building in Edmonton’s severe climate can be compared to one in mild Vancouver such that we know which is more efficient. The EUI is typically expressed in total energy use per unit of floor area or ekWh/sf/yr. 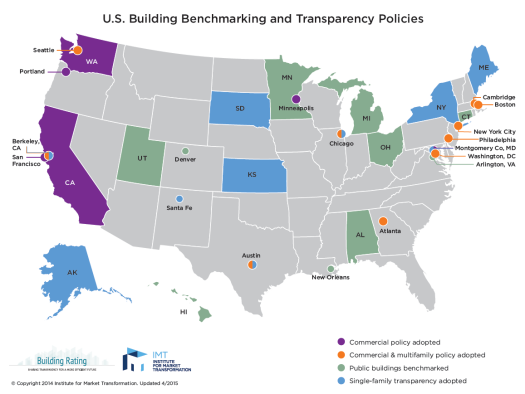 Australia’s Commercial Building Disclosure (CBD) Program, which has been in place since 2011, requires office buildings larger than 2,000 square metres to disclose energy performance through a Building Energy Efficiency Certificate (BEEC) when it is offered for sale or lease. The BEEC includes the building’s National Australian Built Environment Rating System (NABERS) Energy Rating, along with other energy efficiency data. There are currently over 1100 NABERS Energy rated offices across Australia, almost 800 (or 70%) of which are due to the CBD Program. In the second year of implementation, 28% of buildings which applied for more than one BEEC showed improvement in NABERS Energy Rating, with an average improvement of over 0.77 stars (or 13% on NABERS’ 6-star scale).

Research conducted by the US Environmental Protection Agency has shown that simply requiring building owners to benchmark their building’s energy use and performance relative to that of their peers can provide energy savings of as much as 7% over four years. That is largely because benchmarking provides building owners and managers with an easy-to-understand measure of their building’s performance and allows them to see how they perform compared to similar buildings. For building managers and operators who want to remain competitive and better understand what is possible in the market, this type of information can be invaluable.

As well, utilities and service providers can use the collected data to create and tailor more effective energy conservation programs, policies and incentives. As more energy use data becomes available, it is easier to pinpoint which locations and building types are underperforming. Energy conservation programs can then be specifically tailored to target these buildings, making the task of improving their performance more manageable.

Public disclosure of benchmarking data can also create friendly competition between buildings to achieve better performance. This mechanism was used to reduce energy use in Toronto where commercial buildings participating in the voluntary Race to Reduce program cut energy use by 9% over just two years.

Some jurisdictions consider the success of mandatory energy disclosure to be tied closely to other complementary programs, such as mandatory or incentivized energy audits, retro-commissioning and energy retrofits. For example, New York City and San Francisco require that energy audits and retro-commissioning be completed every five to ten years. These allow owners to identify specific actions and opportunities for reducing energy consumption. A publicly disclosed energy reporting program can motivate building owners to reduce consumption, while energy audits show them how.

At 5 Penn Plaza in New York, the benchmarking and energy audit process yielded energy improvements. By analyzing collected energy data, the building’s managers realized that their building was not performing as well as it had done in previous years. Through the mandatory energy auditing, they identified energy conservation measures, such as common area lighting, occupancy sensors, timers, pipe insulation and boiler efficiency modules, that could be implemented immediately. As a result, the building was able to realize a 5% decrease in EUI and a 6-point increase in their Energy Star score. 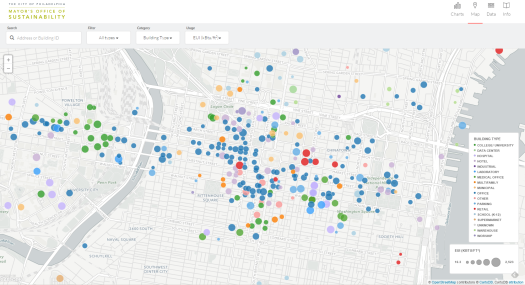 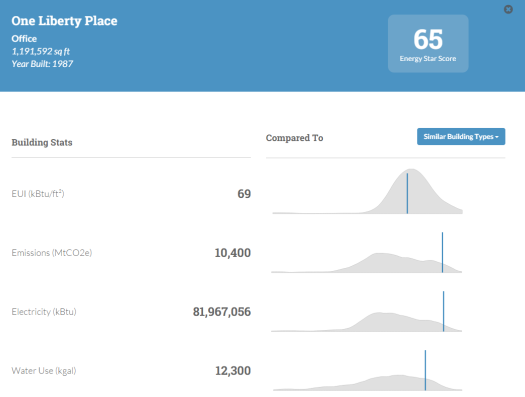 Figure 3 – The City of Philadelphia publicly discloses the energy performance of its large buildings using an interactive online visualization tool.

Energy savings obviously lead to financial savings when building owners and occupants reduce utility consumption. But disclosure can have other financial impacts as well. In real estate transactions, energy performance has typically been undervalued – or outright ignored – because the market has been ill- equipped to understand its impact. With public disclosure, the playing field is levelled, allowing appraisers to more readily use energy performance data to assess comparable properties.

In parts of Europe, buildings receive either an “asset label,” which rates the predicted performance of a building based on its design, or an “operational label,” which is based on actual energy performance. Research from the Netherlands, where properties are labelled with operational energy performance ratings, has shown that buildings with lower ratings achieve 6.5% lower rents than their better-performing counterparts.

One of the main outcomes of public disclosure is education. Disclosure helps property managers, owners, and tenants, many of whom may have been uninterested or uninformed on energy performance and benchmarking, understand their meaning and importance. And while many landlords are not initially receptive to mandatory disclosure laws, their concerns often evaporate once they start gaining valuable feedback that comes from benchmarking.

The resulting conversation and cooperation between tenants and landlords often extends to the wider real estate community, with landlords of different buildings sharing best practices and joining in friendly competition such as we saw with Toronto’s Race to Reduce program. This in turn can lead to the development of hubs or districts of buildings where property managers and owners are working together to reduce building energy use, both for competitive advantage and to improve overall sustainability performance.

One example of this is Seattle’s “2030 District”. 2030 Districts are hubs of high-performance buildings born of cross-sector, public-private collaborations, that have committed to reducing energy and water use, as well as transportation-related emissions, by 50% by 2030.

Seattle’s 2030 District was created largely as a result of the city’s energy reporting law. Property owners behind the 45 million square feet in the urban core which make up Seattle’s district have committed to benchmarking, tracking and sharing environmental performance data. Across North America, there are currently 10 such 2030 Districts, including Toronto, which formally launched its 24 million square foot district in March 2015.

Recent advances in benchmarking energy performance in the Canadian real estate market may help bring energy disclosure programs to Canadian cities. The U.S.-based Energy Star Portfolio Manager, for example, has long been available for use by Canadian properties, but it was only recently licensed for official use in this country. Another popular program is the Real Property Association of Canada’s (REALpac) Energy Benchmarking Program. It offers a free energy benchmarking tool specifically for Canadian office buildings.

The Province of Ontario and the City of Toronto are currently exploring the potential for mandatory energy reporting and benchmarking for energy and water consumption and GHG emissions at large commercial and multi-unit residential buildings. Toronto has already completed the first two phases – research & analysis and joint stakeholder consultations – in their review of the potential for energy reporting and benchmarking. The final report with recommendations is expected to be presented to council in the summer of 2015. Should Ontario proceed with implementing a new regulation, the City will re-evaluate the need to continue developing its own by-law as it does not wish to saddle building owners with a double effort.

On the west coast, Vancouver is looking at how to implement its own energy benchmarking program to help the city reach its goal of reducing GHG emissions by 33% from 2007 levels by 2020. Before such a program can be made mandatory for commercial buildings, the City has proposed that it first collect benchmarking data from both its own buildings and from voluntary participants, primarily large public sector/institutional, commercial, and residential buildings. The City is also seeking to work with public sector, energy utility and industry partners to develop an education and awareness campaign and provide training and support for the various energy benchmarking activities.

Rolling out a successful disclosure program requires time. In 2009, New York City became one of the first cities in the U.S. to enact a building performance disclosure law. However, the program wasn’t fully operational until 2011. Other cities took an average of one year to go from enacted law to first compliance deadline.

Moreover, launching a disclosure program requires significant support from many stakeholders in both the public and private sector. This includes utilities, industry partners, consultants and building owners. Even after implementation, ongoing support in the form of data collection strategy and training is often needed. Engaging building owners and affected stakeholders early on is also critical, not only to establish a program, but to maintain and improve its effectiveness.

Despite these challenges, and despite the relative newness of the concept, requiring large buildings to publicly disclose their energy performance does seem to be working. In many jurisdictions, it is shifting the conversation about building performance and leading to positive behavioural and operational changes. And for cities striving to meet environmental goals like greenhouse gas emissions targets, introducing disclosure laws for most of the building stock is indispensable.

Note: This article appears in the Summer 2015 issue of Sustainable Building & Design magazine.