“The great Tree of Life… fills with its dead and broken branches the crust of the earth, and covers the surface with its ever-branching and beautiful ramifications.”
– Charles Darwin

The most important image in the history of science is found in one of Charles Darwin’s many journals and notebooks. The image in this particular notebook, titled ‘red transmutation notebook B’, was drawn sometime in 1837. The sketch is simple enough: at the top of the page, a humble headline “I think”. Below, a crude yet unmistakable sketch: an evolutionary tree. The Tree of Life.

The illustration was later included in On the Origin of Species, arguably the foundation of modern biology. For the first time it could be conclusively demonstrated how all life on the planet evolved from a common ancestor. All life is connected.

Pterodactyls, cabbage, squid, fungus, humans: we are all one. 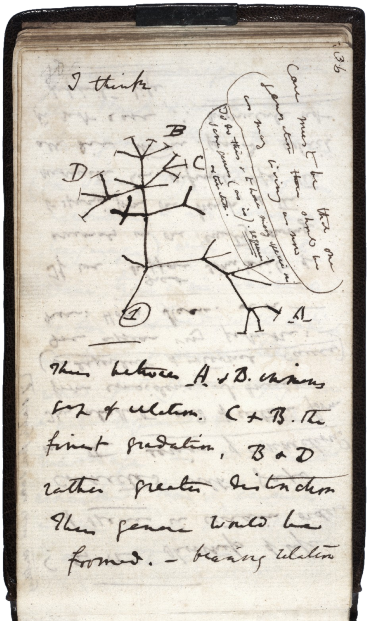